We enjoyed hosting two separate broods of nesting bluebirds in our bluebird box this season. The first one came in early spring, the second moved in soon after the original tenants departed.

I glimpsed them often as the parents tirelessly fed, cleaned house, and protected their families from predators. Like small blue drops of glee, they flitted through my world and I smiled inside. It was all so marvelous and, I knew, temporary. 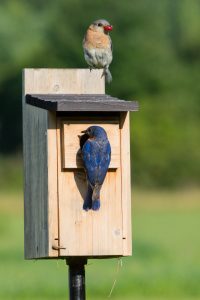 Sure enough we awoke one morning to a silent box that was empty except for the memories. That first family had fledged while we were out. No signs. No waves of goodbye. Just gone.

Weeks later, on the evening the second delightful brood fledged, we were lucky to be sitting on the deck and could be there to root them on to the next phase of their journeys. Even though we wanted so so badly for them to stay. They were unexpected sprinkles of joy on my  life.

I often find myself thinking: I miss the bluebirds. Is that silly? When I share this thought with my husband, he’ll admit he does too.

My sister-in-law’s father was struck and killed by a speeding driver while walking in his own neighborhood. A heartbreaking loss with no waves of goodbye. He was a generous and deeply admired man who I only saw at annual family gatherings but who was quick to laugh and genuinely enjoyed his family and friends. He was that person you know who you just like being around.

My brother’s wife also passed, ending a months-long struggle with cancer. She was the kindest, gentlest person I have never met. Living on opposite coasts, our only interaction was always and only through Facebook. Through posts and messages her loving nature was obvious, to everyone. She was another drop of glee in my ordinary world. I’m glad those who loved her were able to be with her when she lifted away from her body.

Both of these people fledged this world, tearing enormous, unfillable holes in their immediate families and sending ripples of loss across a country to an opposite coast and then throughout the world and larger universe.

So while some people in your life only play small or cameo physical roles, they still manage to leave big holes in your heart when they leave. You’re going to miss them.

It’s okay to miss the bluebirds. It’s right to.

2 Replies to “Missing the Bluebirds”